“If the Almighty were to rebuild the world and asked me for advice, I would have English Channels round every country. And the atmosphere would be such that anything which attempted to fly would be set on fire.” Winston Churchill

“It cannot take decades to resurrect, we must act immediately with purpose and enthusiasm to rebuild.” Alan Autry

We like to build things; play things with blocks, sculptures with clay, buildings with brick. Humans like to build things – monuments to ourselves as a race (Tower of Babel), or to individuals of genius (Frank Lloyd Wright), or in the names of gods (and goddesses – Notre Dame Cathedral) – if for no other reason because it proves we were here. We build. We renovate. We raze. We rebuild. From towering sky-scrapers to ornate cathedrals to featureless strip malls – WE BUILD!  And we call it progress, even when it lacks improvement.

“When one’s life has been shattered into a million pieces, most set out to pick up the pieces & rebuild. Others look at those broken pieces and decide this is their opportunity to start anew, the bigger picture comes into view. They see more, and want better so they leave those pieces scattered as a memorial to who they used to be!” Sanjo Jendayi 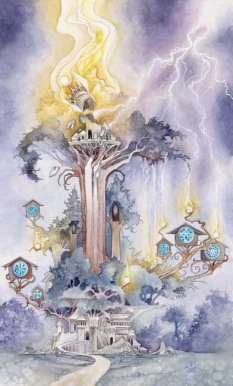 “Only in the shattering can the rebuilding occur.” Barbara Marciniak

We become so involved in building, we sometimes forget the simple adage, “What goes up, must come down” applies to more than physics or gravity. In fact, it applies to just about everything.That which we create will eventually be destroyed – by time, acts of Gods, inattention, hubris – and we will be powerless to stop it; we may be able to slow it down but we will never stop it. And what’s more: WE SHOULD NOT!

“Everybody’s constantly being destroyed and rebuilding themselves, some more drastically than others.” Michael Shannon 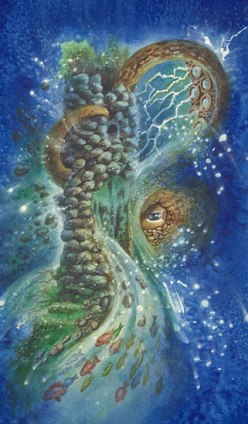 The Tower lives within each of us, not only in man’s desire to create monuments but as part of our very selves; we want to make, build, and create the world around us through the families, friends, homes, careers, and colleagues we carefully structure around us. We create from nothing (read born as a blank slate) entire lives for ourselves, and we guard them with ferocity….but maybe we shouldn’t. The Tower is not so much a terrible warning as it is a cautionary tale; anything that can be created can also be destroyed just as well as anything destroyed can be recreated.

The City of Chicago was obliterated by fire, only to be rebuilt bigger, better and more beautiful than the original founders ever imagined. San Francisco was leveled by an earthquake and as in Chicago, also rebuilt beyond the wildest dreams of its founders. If asked, absolutely no one would have suggested razing either city to start again – good thing the choice was not theirs to make – but we cannot deny the benefits of those losses; the destruction of Chicago and San Francisco led to advances in city planning, fire safety, architecture, public services (to name a few), creating new templates for city building in other areas.

“Rebuild your world, rebuild your race, rebuild your empire. Rebuild it all. But make sure you rebuild your ideals too. Rebuild the principles that made you a great and honorable galactic power in the first place. Don’t prey on the weak. Don’t steal from the helpless. Don’t murder the innocent. Be a force for good, not a force for yourself.” Dan Abnett, Doctor Who: The Silent Stars Go By

Change is on the wind, we can feel it with every hair standing on our necks. The world erupts in crisis on a daily basis as the geopolitical landscape becomes increasingly desperate for the very changes that bring about the destruction that leads to re-creation; they are trying to call The Tower, and they really should be more careful in their wish-making. Locally, the race for U.S. President becomes increasingly farcical as the least qualified candidate ever to throw his hat in the ring faces the most qualified candidate the electorate has ever been offered – and there is serious contention!

“Despite the sudden and irrevocable nature of the changes indicated by The Tower, there is one thing certainly up to you: will you fall, be thrown, or jump? And then, what will you do about it.”  Julianne CeCe

2 thoughts on “Living Tarot: The Tower”