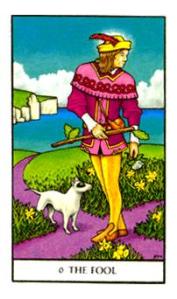 Tarot cards are fascinating; each card portraying archetypal images open to so many styles, artistic impressions, interpretations – simply fascinating to the curious mind.

Generally speaking, people are insulted when called a fool, associating the word with stupidity. Frankly, I am insulted by both parties (insult-er and insulted) – the idea of The Fool as stupid as ludicrous. The Fool, also known as The Royal Court Jester or The King’s Own Fool, was NOT stupid; he was charged with bringing to court not only physical entertainment and bawdy mirth but also savvy political satire. Additionally, he had to be politically savvy himself to walk the very fine line between entertainment and an insult too far. This was not a character to treat lightly, dismissively or disrespectfully as he often had the king’s ear in private. There was no shame in being The Fool.

For the readers’ convenience, I have posted several tarot images; each card varies in presentation while maintaining important elements; The first image depicts a crossroads – which way to go? The second image portrays a multitasking balancing act. The third image provides a faithful dog trying to help avoid the first misstep (it’s a doozy!).

The common element to all three images, the important message of The Fool in my opinion, is that of moving forward. This is the original Nike ad – Just Do It. Get started. Take a step. Go forward. Move ahead. It’s not too late. Just do it. The Fool moves without fear, without care, without hesitation – he chooses a path and moves forward. The Fool is the first card of the Major Arcana, and yet he is numbered zero (0) rather than (1). Other card readers would tell you all the very important historical, numerological,archetypal significance of the number, but I think it is very simple – nothing starts without a first step, and until the first step is taken, there is nothing.

I challenge us all to be The Fool, to take those first steps we are each avoiding in our own way – to fearlessly move forward and do something, even if it is wrong, to get started on a new path.